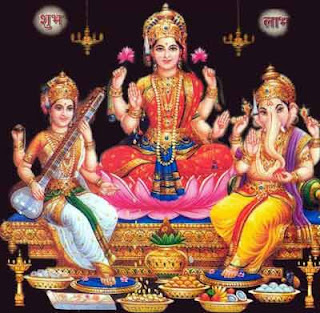 In each legend, tradition and story of Deepawali lies the significance of the victory of good over evil; and it is with each Deepawali and the lights that illuminate our homes and hearts, that this simple truth finds new reason and hope. From darkness into light — the light that empowers us to commit ourselves to good deeds, that which brings us closer to divinity. During Diwali, lights illuminate every corner of India and the scent of incense sticks hangs in the air, mingled with the sounds of fire-crackers, joy, togetherness and hope. Diwali is celebrated around the globe. Outside India, it is more than a Hindu festival, it is a celebration of South-Asian identities.
While Deepavali is popularly known as the "festival of lights", the most significant spiritual meaning is "the awareness of the inner light". Central to Hindu philosophy is the assertion that there is something beyond the physical body and mind which is pure, infinite, and eternal, called the Atman. The celebration of Deepavali as the "victory of good over evil", refers to the light of higher knowledge dispelling all ignorance, the ignorance that masks one's true nature, not as the body, but as the unchanging, infinite, immanent and transcendent reality. With this awakening comes compassion and the awareness of the oneness of all things (higher knowledge). This brings anand (joy or peace). Just as we celebrate the birth of our physical being, Deepavali is the celebration of this Inner Light.
While the story behind Deepavali and the manner of celebration varies from region to region (festive fireworks, worship, lights, sharing of sweets), the essence is the same – to rejoice in the Inner Light (Atman) or the underlying Reality of all things (Brahman). 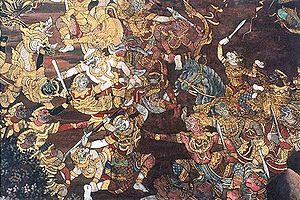 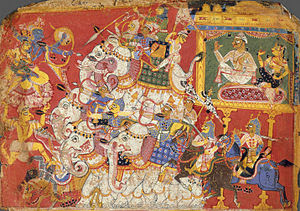 Houses full of lights
Diwali falls on the one new moon night between mid-October and mid-November. Deepavali is celebrated for five days according to the lunisolarHindu Calendar. It begins in late Ashvin (between September and October) and ends in early Kartika (between October and November). The first day is Dhan Teras. The last day is Yama Dvitiya, which signifies the second day of the light half of Kartika. Each day of Deepavali marks one celebration of the six principal stories associated with the festival.
Hindus have several significant events associated with Diwali:
Other events associated with Diwali include:

Diwali being festival of lights, across India people celebrate it via symbolic diyas or kandils (colourful paper lanterns) as an integral part of Diwali decorations. 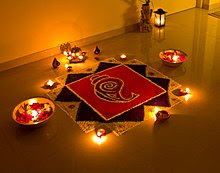 Rangoli, decorations made from coloured powder, is popular during Diwali
Deepavali celebrations are spread over five days, from Dhanteras to Bhaiduj. In some places like Maharshtra it starts with Vasu Baras.All the days except Diwali are named according to their designation in the Hindu calendar. The days are:
Posted by nilesh40 at 11:08